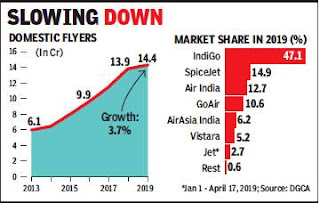 The double-digit growth of domestic air travel seen in past few years crashed to 3.7% with 14.4 crore people flying within the country in 2019, against 13.9 crore in the previous year. The fall in growth, though still in positive territory, happened due to the collapse of Jet Airways last April that led to a sharp hike in air fares, amid an overall economic slowdown.

Aviation ministry’s quick grant of Jet’s slots to other airlines, with SpiceJet and Vistara taking ex-Jet Boeing 737s, and IndiGo growing at its one-plane-a-week pace, ensured that 2019 over 2018 did not see a fall in domestic air carriage.

Industry insiders are keeping their fingers crossed. “The operating cost of running an airline in India is prohibitive due to high tax on jet fuel and a serious infra crunch at airports. The Kingfisher-Deccan combine shut down in 2012 and then there was a gap of seven year with Jet-Sahara combine collapsing in 2019. So the industry had some time to recover. But at the moment, Air India is in a precarious state financially. Its divestment must proceed successfully. We cannot afford two big airlines shutting down within a space of about a year,” said a senior official.