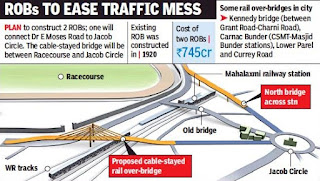 BMC has finalised a contractor for two bridges at Mahalaxmi at a cost of approximately Rs.745 crore. One of them will be cable-stayed. BMC has kept a target of 36 months, excluding monsoon, to complete the bridges.

Civic bridges department officials said that while a rail over-bridge will connect Dr E Moses Road to Jacob Circle, the cable-stayed one will be between Mahalaxmi racecourse and Jacob Circle. The old Mahalaxmi bridge is likely to be reserved for walkers once the ROBs are constructed.

The proposal, to be tabled before the civic standing committee, said they were being constructing as the bridge over Mahalaxmi railway station is 100 years old and its lifespan is almost over. The ROB is overcrowded, an official said. Once the coastal road is operational, the two ROBs can help regulate traffic, especially for motorists wanting to connect to the coastal road, which will pass from Haji Ali in Worli. “One bridge will go from the north side of the existing bridge, from Dhobi Ghat, and land on Dr E Moses Road, while the other will be on the south side, and go past the FOB constructed recently outside Mahalaxmi station, and come out near New Shirin Talkies,” said the official, adding that the north side of the bridge will be a conventional bridge. “The south side will be cable-stayed as there are many railway tracks below, and railways is not in favour of piers being constructed on its property,” added the official.

The railways and BMC, for several months, could not agree on who would construct the ROB portion over the tracks. BMC had sent general arrangement drawings of the proposed ROBs to the railways for approval in March 2018. Railways replied that the portion should be executed by BMC under the supervision of a railway engineer. BMC officials said bridges over railway premises are constructed and maintained by railways. After a meeting with then chief minister Devendra Fadnavis and Union railways minister Piyush Goyal, it was decided that BMC would construct the ROBs.