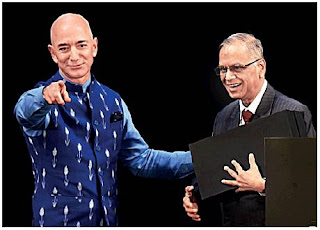 Before this, the online retail giant had committed $5.5 billion investments in India — Amazon’s most important market outside of the US and a key growth driver.

“We are committed to being a long-term partner of India. And actions speak louder than words,” Bezos said.

“Over the next five years, Amazon will invest an incremental $1 billion to digitise micro and small businesses... across India, helping them reach more customers than ever before. This initiative will use Amazon’s global footprint to create $10 billion in India exports by 2025,” he said.

He added that part of this goal is to ensure that more people can participate in the prosperity of India. “We are making this announcement now because it is working... When something works you should double down on it. And that is why we are doing it.”

Amazon hopes that this investment will “bring millions of more people into the future prosperity of India and at the same time expose the world to the ‘Make in India’ products that represent India’s rich, diverse culture”.

The $1 billion investment would be to digitise 10 million micro, small, and medium enterprises and traders across India, including manufacturers, resellers, local offline shops, and brands.

The company had previously said it expected e-commerce exports from India to reach $5 billion by 2023 under its global selling programme.

Bezos, who began a three-day visit to India on Tuesday by visiting Mahatma Gandhi’s memorial at Rajghat, was speaking at the SMBhav summit — an Amazon India gathering for small and medium businesses.

“The 21st century is going to be the Indian century,” the Amazon founder said, adding: “This country has something special: its dynamism. I also predict that the most important alliance in the 21st century will be between India and the United States.”

Bezos is expected to meet top government functionaries and business leaders during the trip. His visit has been marked by Competition Commission of India initiating a formal investigation into alleged deep discounts, preferential listing and exclusionary tactics adopted by Amazon and Flipkart, and small store owners demonstrating against online retailers driving them out of business by offering sharply discounted products.

Over five lakh traders, across 300 cities, came together under the umbrella of Confederation of All India Traders (CAIT) on Wednesday to protest against Bezos’ visit.

CAIT Secretary General Praveen Khandelwal said the business model of e-commerce giant Amazon and its subsidiary Flipkart has created distortionary effects. He said they have indulged in unethical and monopolistic business practices.