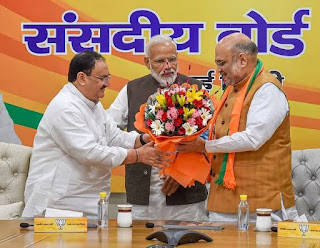 Seven months after being appointed the working president of the Bharatiya Janata Party, Jagat Prakash Nadda was elected unopposed the party president and assumed charge soon after. Nadda’s candidature was backed by three former BJP chiefs — Amit Shah, Rajnath Singh and Nitin Gadkari — and no other candidate filed nominations for the top post.

As per the party’s constitution, no candidate has hold the top post for more than two terms, each lasting three years and there is a convention of ‘one person, one post.’ Outgoing chief Amit Shah had completed his term in January 2019, but the internal polls were deferred due to the parliamentary elections. Shah was later inducted into Prime Minister Narendra Modi’s cabinet as home minister and former health minister Nadda had been brought in as the working president.

Nadda remains a trusted lieutenant of the BJP’s top duo Modi and Shah and has risen through the ranks by delivering several crucial polls. Last year in the Lok Sabha polls, he was the party in-charge of the election campaign in Uttar Pradesh, where he manoeuvred against the grand alliance and helped win 62 out of the 80 parliamentary seats. He is credited for his contribution to the Ayushman Bharat scheme that is one of the pet projects of the PM.

In a grand felicitation programme at the BJP headquarters, PM Modi recalled his days of working with Nadda on a ‘scooter’ and during their time together in Himachal Pradesh, from where Nadda originally belongs.

“ Nadda Ji’s leadership will give us new energy, hope, and inspiration. We must ensure that he is successful.”