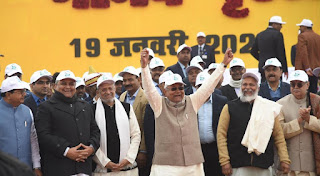 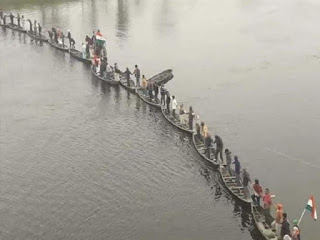 Over 5.16 crore people formed an 18,034-km long human chain in Bihar to create awareness about conservation of water and increasing green cover, prohibition and the adverse impact of social evils like dowry and child marriage.

The human chain, the third of its kind in the state, was formed by the state government under its ‘Jal-Jeevan-Hariyali’ campaign. A little over 57.76 lakh schoolchildren from Class I to IV also took part in the human chain but on their respective campuses. Besides, 43,445 prisoners also formed a human chain inside the jail premises, he said.

Chief minister Nitish Kumar, who joined the human chain along with deputy chief minister Sushil Kumar Modi, assembly speaker Vijay Kumar Choudhary and ‘Water Man’ Rajendra Singh at Gandhi Maidan, thanked people for their record participation. Though the human chain was officially formed from 11.30 am to 12 pm across the state, people had lined up on the streets much before the event started.

Seven choppers and over 100 drones were used to cover the event. The representatives of Limca Book of Records and Indian Book of Records were present to assess the length of the human chain, which was claimed to be the longest so far across the globe. Anjani Kumar Singh, the adviser to the CM, said the representatives of Guinness World Records were also invited but they expressed their inability to come due to some technical reasons.