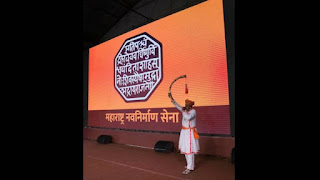 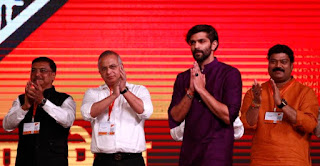 MNS chief Raj Thackeray indicated that he was set to appropriate his late uncle Bal Thackeray's Hindutva cause, unveiling his party's new saffron flag and declaring support to the NDA government for evicting Pakistani and Bangladeshi “infiltrators”.

Thackeray, who ran a vigorous campaign against the BJP and Prime Minister Narendra Modi during the Lok Sabha polls last year, also defended the Citizenship (Amendment) Act and National Register of Citizens.

He also announced that the Maharashtra Navnirman Sena would take out a protest march on February 9 seeking eviction of illegal migrants from Pakistan and Bangladesh.

Earlier in the day, the MNS chief unveiled his party's new flag which is completely saffron and bears King Shivaji's 'rajmudra' (royal seal).

"I am a Marathi and a Hindu too. I have not changed my religion....If you try to mess with the Marathi in me, I will go after that person as a Marathi, and I will go after him as a Hindu if one messes with the Hindu in me," Raj said at the valedictory session of the party's plenary meeting here.

Downplaying speculation about his ideological shift towards Hindutva from his earlier `Marathi manoos' and son- of-the-soil agenda, he said he had this flag design in mind since the launch of the MNS. Its unveiling amid the current political situation was a "pure coincidence", he said.

The Shiv Sena, from which Raj carved out his own party, is known for its Hindutva ideology. But the Uddhav Thackeray-led party did a radical about-turn last year when it ditched the BJP and formed government in Maharashtra with the Congress and the NCP.

In a veiled dig at Uddhav, his estranged cousin, Raj said, "I don't change the colour of my party to form the government."

Raj also said in his speech that the Muslims who are "honest" towards the country "are ours". The country cannot "reject" personalities like former President APJ Abdul Kalam, former Indian pacer Zaheer Khan and lyricist Javed Akhtar, he said.