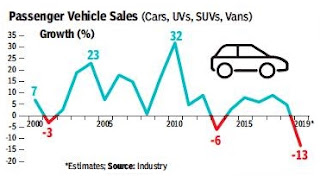 Indian auto industry wrapped up one of its most difficult periods in the year 2019 as sales of cars and SUVs went into a free fall, witnessing the biggest decline in over two decades as rising uncertainties, difficult financing, and the economic slump kept buyers away despite heavy discounts. Such had been the pressure that the numbers fell despite the entry of new brands such as Kia Motors and MG Motor, which surprisingly managed a strong opening even in a difficult market.

According to numbers sourced from the industry, sales of passenger vehicles — a cumulative of cars, vans and SUVs — fell below the psychological 3-million mark in 2019, after crossing the figure for the first time in 2017. The decline was led by the top brands that included Maruti Suzuki, Hyundai, Mahindra & Mahindra, Tata Motors, Honda and Toyota.

The recipe for slowdown has been in the making since the middle of 2018 when numbers had actually started falling. The declines began to get deeper, and sharper, in the coming months and rather got more pronounced in 2019 as economic growth came under pressure and political uncertainties, with relation to the national elections, started growing. And, as liquidity pressures started mounting after the NBFC crisis and issues such as unemployment became severe, the industry started collapsing. Adding to the conundrum was the confusion around the migration to BS6 emission regime from April 2020 from the existing BS4.

Maruti — which also flags rising vehicle prices as a depressant — was able to hold on to its 50% share of the market, but feels that the industry still remains “cautiously optimistic”.