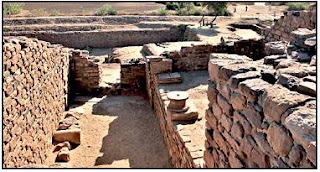 A study of archaeological evidences dating back to 3,800-5,500 years before present era at Dholavira, India’s biggest excavated Harappan site, has presented a classic case of how climate change can increase future drought risks as predicted by Intergovernmental Panel on Climate Chang, says a team of top researchers in India.

In a recent publication ‘Did the Harappan settlement of Dholavira (India) collapse during the onset of Meghalayan stage drought?’ published in Wiley Journal of Quaternary Science, researchers from IIT Kharagpur, PRL, ASI and Deccan College claim that climate change led to the fall of Harappan metropolis.

The city, which lasted for 1,700 years at the same spot between 3500 and 2300 years before common era (BCE), ceased to report any new developments after 2300 BCE after it reeled under a possible 300-year-long drought.

In fact, the climate of now arid Kutch was different at the time of Dholavira's development. :Research indicates presence of a glacier-fed river which could be the Vedic ‘Saraswati’ and a mangrove ecosystem in the vicinity,” says Prof Anindya Sarkar from IIT-Kharagpur, who led the study

The climate evidence came from analysis of high-resolution oxygen isotopes in snail shells Terebralia palustris. “The shells typically grow in mangroves and was a possible source of food for the Dholavirans,” said collaborator Dr Arati Deshpande Mukherjee from Deccan College. Experts pointed that like tree rings, study of the shell development pattern of molluscs having a long lifespan also reveal a lot about the climate they lived in.

For example, the researchers came to a conclusion that it could have been a mangrove area as T. palustris is typically found in mangroves such as present today in the Gulf of Kutch. And where do mangroves grow? In brackish water — pointing at the presence of both a freshwater source and ingress of seawater.

“The early to mature Harappan (4,958 to 4,332 years before present era) snail isotopes suggested that the mangrove was fed by a ‘glacial river’ debouching in the Rann of Kutch. However, during the late Harappan period the meltwater contribution and seasonality reduced coinciding with the fall of Dholavira,” said Torsa Sengupta, doctoral student at IIT Kharagpur and lead author of the paper.

Other researchers such as Dr Ravi Bhushan and Dr Navin Juyal from PRL, Ahmedabad, analyzed the artefacts that pointed at long period of occupation and eventual abandonment as they could not find the cultural continuation observed in earlier phases. Favourable climatic conditions were inferred from gradual expansion of the town over centuries, whereas gradual water scarcity was identified by presence of major water reservoirs at the site.