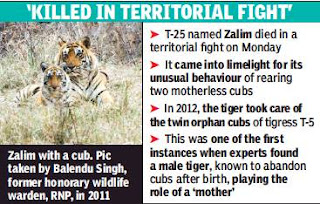 Ranthambore tiger T-25 named Zalim, which came into limelight for its unusual behaviour of rearing two motherless cubs, died in a territorial fight.

The carcass of the tiger was found near Jarkhala nalla in Sanwata area of Ranthambore Tiger Reserve. After the post-mortem, the forest department has concluded that the death occurred in a territorial fight.

Mukesh Saini, divisional forest officer, Ranthambore National Park (RNP) said, “The tiger had two injuries on its head. It was found to have two canine marks above the eyes. The big cat died in the territorial fight with 10-year-old tiger T-66 whose movement was recorded with tigress T-54 in the same area.”

“Tiger T-25’s behaviour of taking care and raising cubs to adulthood was unique and it has never been seen or filmed before this incident,” the official said.

“Sad news for wildlife that Ranthambore’s famous tiger T-25 is no more. It was a magnanimous tiger which took care of two orphan cubs, displaying fatherly instincts to raise and protect them to the surprise of conservationists. T-25 will be missed,” Gehlot tweeted.

In 2012, the tiger took care of the twin orphan cubs of tigress T-5. This was one of the first instances when experts found a male tiger, known to abandon cubs after birth, playing the role of a ‘mother’, something unheard of about tigers.

The tiger was often spotted with the orphaned cubs, looking after them since they were four-months old.

In the past four months, this is the second death of a big cat in the park from territorial fights. Three-year-old T-109 named Veeru was found with 35 wounds in October last year.

Cramped in an area of 392 sq km of core area with a 1,342 sq km buffer zone, it has been extremely difficult for big cats to find adequate space in the reserve, which is bursting at its seams due to increasing population.

Pushed to the periphery of the reserve, it’s a tough choice for them to either fight with dominants, create space for themselves or stray into human habitation.

Dinesh Verma Durani, founder and general secretary of Sariska Tiger Foundation and a member of the advisory committee, said, “The forest department claims that no new male tigers can be relocated to Sariska Tiger Reserve ss the National Tiger Conservation Authority has refused to approve proposals of fresh relocation after a male tiger died in April. It was a natural death. Since then, two tigers have died in Ranthambore. The department should strongly present their case at NTCA to save tigers by moving them to Sariska.”