Mumbai: Ropeway to link DN Nagar-Dahisar Metro 2A with Gorai across creek 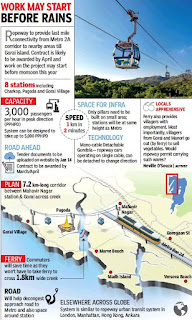 Apex planning agency, Mumbai Metropolitan Region Development Authority, plans to link the DN Nagar-Dahisar Metro 2A corridor with Gorai by building a ropeway between Mahavir Nagar station and the island. An official said work on the project will start before monsoon.

“The ropeway is planned to provide last mile connectivity. The corridor will be connected to Mahavir Nagar Metro station. Along the last mile route it will provide connections to Charkop area, Pagoda and Gorai Village,” Metropolitan commissioner RA Rajeev said.

This will be the second ropeway in the metropolis as Mumbai Port Trust has already finalised plans for a ropeway between Sewri and Elephanta island. Earlier, MMRDA had planned a 3.6 km-long Charkop-Marve Village ropeway with stations, but it was not found feasible.

The Rs.500-crore Mahavir Nagar-Gorai ropeway will have eight stations for which spots have been short listed. “The tender will be floated by the end of next week,” an MMRDA official said. Asked about Coastal Regulation Zone norms, an official said the project would not violate any rules.

The MMRDA's plan has received mixed reactions from residents. “Affordability and frequency of services would matter. It could help those living in the interiors of Charkop to reach Kandivli by avoiding the heavily congested Link Road,” said Charkop resident Urmila Dev.

Gorai residents said the project was clearly aimed at benefiting tourists and authorities did not seem to care about the villagers. Neville D'Souza, an activist who works in Gorai village, “At present, residents of Gorai and Manori villages travel to Borivli through ferry. It suits them as the ride takes about five minutes and is discounted for locals. A majority of locals carry motorcycles aboard the ferry so they can use it to continue their journey after getting off at Borivli. The ferry service also provides villagers with employment. Most importantly, villagers from Gorai and Manori go out to sell vegetables. Would the ropeway system permit carrying such wares?”