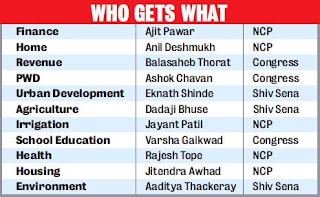 More than a month after he was sworn in as Chief Minister, Shiv Sena Chief Uddhav Thackeray finally allocated portfolios to his cabinet members. But the monthlong tussle over ministries has left the Sena with a raw deal. Among the big five ministries, the party has only managed to get Urban Development Department while the NCP has bagged most of the important ministries like Home, Finance and Housing followed by the Congress which managed to take away Revenue and Public Works.

CM Thackeray has retained only the General Administration Department, Law and Judiciary, IT and Public Relations while the UD department has been allotted to Sena’s Eknath Shinde. Yuva Sena chief Aaditya Thackeray was given Environment, Protocol and Tourism. The Sena has mostly managed to retain the departments it held in the previous BJP-led government.

Those are Industries, Transport, Environment and MSRDC. These departments were allotted to Subhash Desai, Anil Parab, Aaditya and Shinde respectively.

According to the list approved by CM Thackeray, his deputy chief minister Ajit Pawar will head Finance. The new home minister will be NCP’s Anil Deshmukh. While the Sena was keen on taking Home, NCP’s wish prevailed. Deshmukh, a senior NCP leader from Nagpur, was chosen for the crucial job by NCP supremo Sharad Pawar.

Political observers said that the entire distribution of portfolios had Sharad Pawar’s stamp on it and it was the NCP that had benefitted the most from this exercise. Rural development has gone to Hasan Mushriff, Co-operation to Balasaheb Patil, Water Resources to Jayant Patil and Social Justice to Dhananjay Munde. Jitendra Awhad will head housing while Rajesh Tope will helm the health department.

A senior Sena functionary admitted that the NCP was in the driver’s seat. The NCP has got the maximum number of ministries (16). Besides the CM post, the Sena could bag 14 ministries but barring urban development, agriculture and industries, the rest weren’t that important.

According to the functionary, the Sena wanted Urban Development and Housing keeping in mind the BMC elections in 2022.

Sena’s Anil Parab has got Transport and Parliamentary Affairs while Forests has gone to Sanjay Rathod and Water Supply and Sanitation to Gulabrao Patil.

Among the Sena’s ministers of state or junior ministers, Shambhuraje Desai has got home (rural); Abdul Sattar has got revenue, rural development, port lands and special assistance; Independent Bacchu Kadu has got water resources and school education; Rajendra Patil Yadravkar has got public health.

Sattar, who had reportedly quit the government after failing to get a cabinet berth met CM Thackeray on Sunday. Sattar, an MLA from Sillod had on Saturday denied any reports of his resignation. “I have told Uddhavji about my perspective. I am very much a part of the Sena. I am meeting him again on Monday evening,” he said.