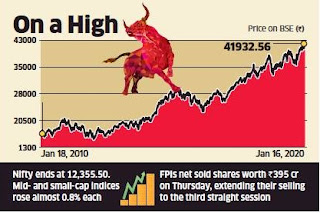 Benchmark equity indices hit fresh records with the Sensex touching 42000 for the first time ever but gains were modest as investors were focussed on mid- and small-cap stocks. Analysts said bluechips, which form the main indices, were unable to maintain the momentum because of a slowdown in foreign portfolio inflows.

Foreign portfolio investors net sold shares worth ₹395 crore on Thursday, extending their selling to the third straight session. Though their selling so far this week has been modest, the absence of fresh flows is hindering the recent record-breaking rally in Sensex and Nifty. So far in January, they have pumped ₹2,059 crore into Indian equities.

The break in inflows triggered by an eruption of tensions between Washington and Tehran after a US air strike killed a top Iranian commander, Qassem Soleimani, cut short the run-up in stock indices boosted by a riskon trade in emerging markets that has resulted in Rs 55,000 crore flowing into domestic stocks since mid-September.

CLSA said the Nifty is currently consolidating after the initial breakout with the move above 12,070-12,118.

Elsewhere in Asia, stock markets ended mixed on Thursday as investors digested the fine points of the phase one trade deal between the US and China the previous night.