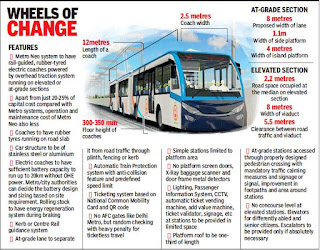 Delhi is likely to become one of the first major cities in the country to have a “Metro Neo” corridor, which is a rail-guided urban transport system with rubber-tyred electric coaches powered by an overhead traction system running on elevated or at-grade sections.

The light transit system, which costs about 20-25% of a Metro and also has lower maintenance costs, is likely to come up between Kirti Nagar and Bamnoli near Dwarka, where a MetroLite corridor was proposed last year.

While MetroLite also has a lower carrying capacity compared with Delhi Metro, it is a rail-based system and costs 40% of a Metro system. Delhi Metro Rail Corporation had not only prepared a detailed project report (DPR), but also floated tenders for procuring MetroLite coaches.

“For the Kirti Nagar-Bamnoli corridor, a decision was taken by DMRC’s board of directors to explore the possibility of implementing the Metro Neo technology and get a DPR prepared for it,” said Anuj Dayal, executive director (corporate communications), DMRC.

While the 19km Kirti Nagar-Bamnoli MetroLite project was pegged at Rs.2,673 crore, the cost of a Metro Neo corridor would be around Rs.2,000 crore. The standalone corridor would connect Kirti Nagar interchange station, where Blue (Dwarka-Noida City Centre) and Green (Inder Lok-Brig Hoshiar Singh) lines of Delhi Metro meet with the high-speed Airport Express Line, which is also being extended from Dwarka Sector 21 to Dwarka ECC near Bamnoli.

The Metro Neo system would have three-coach sets, with each being 12 metres long and 2.5 metres wide and a floor height of 300-350mm. Made of stainless steel or aluminium, the coaches would not only be smaller, but also lighter than Delhi Metro rakes. The average axle load would be around 10 tonnes instead of the usual 17 tonnes of Metro coaches.

The rubber-tyred Metro Neo coaches would run on road slabs, which could be elevated or at-grade. When running at-grade, Metro Neo would have a dedicated lane separating it from road traffic with the help of a plinth, fencing or kerbs. There would be an Automatic Train Protection system with anti-collision feature and predefined speed limit.

The stations, both at-grade and elevated, would be simple structures with no Automatic Fare Collection gates, X-Ray baggage screening, door frame metal detectors or other features associated with Delhi Metro. Metro Neo platforms would be simple, open and serve the functional requirement of exchange of passengers between the platform and the vehicle. Only bare minimum facilities like lighting, CCTV, public information system, etc would be provided.