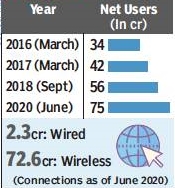 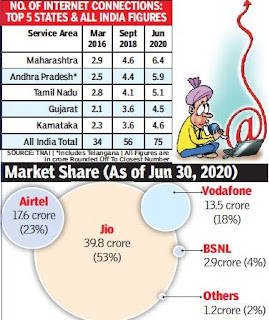 Internet connections in India breached the 75-crore milestone as of August 31, 25 years after public service was launched on August 15, 1995.

The number more than doubled from 34 crore in March 2016, coinciding with Digital India programme launched in 2015. India hit the 50-crore mark in September 2018 and since then, on average, added 86 lakh connections a month.

As per Trai, most connections are in urban areas and availed of through mobile phones and dongles. There were 74.9 crore connections by June-end—narrowband (5 crore) and broadband (69.8 crore). The number of broadband connections rose to 71.6 crore by August-end, taking the total connections to 76.7 crore.

However, this doesn’t mean the same number of people have access to the internet. When India touched the 56-cr mark in 2018, for instance, the subscriber base was only 35 crore. The data on the number of users is not immediately available for this year's figures.

While the overall subscriber data is available up to August, the breakups are available only up to June 30, 2020. As per that information, 61% of all connections were in urban areas and 97% were wireless.

The COAI has proposed to Trai to introduce a minimum floor price for data on a trial basis, which the latter has said would be considered for an open-house discussion. The association has also asked the government to reconsider spectrum charges and revisit other fees and charges causing distress to the sector.

Five states — Karnataka, Tamil Nadu, Andhra Pradesh (including Telangana), Gujarat and Maharashtra — account for 26 crore (or 35% of all) internet connections. Separate data shows that as of June 30, 2020, Reliance Jio had the most market share, followed by Airtel and Vodafone.