It’s an October Like Never Before for Car Companies 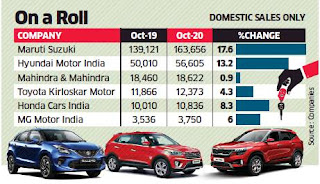 Sales of cars, sedans and sport utility vehicles have touched an all-time high in October on sustained demand for personal mobility solutions and healthy offtake in rural areas.

Dealerships had already built up inventory anticipating robust sales during Navratri, Dussehra and Diwali. Industry estimates that around 333,700 passenger vehicles were sold last month, a 17% increase from the 285,047 units in the year-ago period.

Prior to this, the highest ever wholesale of passenger vehicles — 310,047 units — was reported in September 2017, data from industry body Society of Indian Automobile Manufacturers showed.

Automakers in India report dispatches from factories and not actual retail sales to customers. Market leaders Maruti Suzuki and Hyundai Motor India posted double-digit growth in sales. Volumes went up 17.6% to 163,656 units for Maruti Suzuki, while it rose 13% to a record 56,605 units for Hyundai in October.

“October should be good in terms of production and sales. This year, Diwali is in November, so it should be alright. Carmakers go all out to minimise inventory with dealers in December. After that, hard to predict sales, once the impact of festivals and people wanting personal vehicles is over,” he said.

Tarun Garg, director (sales, marketing and service), Hyundai Motor India Ltd, said: “The October month sales performance has set a positive tone for overall business environment and we are confident that Hyundai will continue to strongly contribute towards sustainable growth of economy, community and all its stake holders.”

Homegrown auto maker Tata Motors is estimated to have increased sales by 79% to 23,600 units in October.

A Tata Motors spokesperson declined to confirm the sales numbers, but said, “We have seen good momentum continuing and month on month sales rising in October as well. In Navratri Dusshera, we recorded 103% growth in bookings and 90% growth in retails.”

Mahindra & Mahindra saw a marginal 1% increase in sales at 18,622 last month. Veejay Nakra, CEO (automotive division), M&M, said, “We are happy to achieve a growth of 4% in utility vehicles, despite certain supply constraints…For Mahindra, the festive season has started on a positive note with deliveries and bookings being higher than last year.”

The company clocked a growth of 52% compared to the wholesales of 8,116 units registered in September. Orders stood even higher at 1.5X of wholesale volumes. Naveen Soni, senior V-P (sales and service), TKM, said, “October has been our best month so far since March. The festive season has proved to be bullish as we witness demand surging, month on month…The fact that our wholesales have been registering an average growth of close to 50% every month gives us confidence that the demand for bigger vehicles is rising too, with both the Innova Crysta and the Fortuner clocking promising figures compared to earlier months.”