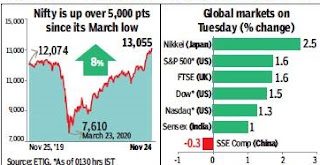 A global rally on positive news about Covid vaccines, which was further boosted by reports of former US Federal Reserve chair Janet Yellen possibly being confirmed as the next US Treasury secretary, lifted investor sentiment on Dalal Street on Tuesday.

A day earlier on Monday, after the AstraZeneca-Oxford combine released its primary data on its vaccine trials with over 70% efficacy, there were reports that US President-elect Joe Biden has decided to select Yellen as the next Treasury secretary. Market players believe Yellen will work to revive the economy, irrespective of political push & pull.

Wall Street, which was rallying on vaccine news, finally settled nearly 400 points up on the Yellen news on Monday night. Even on Tuesday, US stocks reached a historic milestone as hurdles were removed from Biden’s path to the White House in January. The Dow surged past 30,000 points for the first time as receding US political uncertainty and hopes for coronavirus vaccines offset worries over spiking Covid-19 cases.

The gains in the leading domestic indices on Tuesday came on the back of a Rs 4,563-crore net buying by foreign funds, BSE data showed. With this inflow, the total net FPI buying in November went past the Rs 55,000-crore mark — an all-time monthly high, official data showed. The rally in the market also made investors richer by Rs.84,000 crore with the BSE’s market capitalisation now at Rs.173.1 lakh crore, another record.

Tuesday’s session was supported by strong buying in financial stocks, along with Reliance Industries and ITC. On the other hand, selling in HDFC limited the gains in the index, BSE data showed.