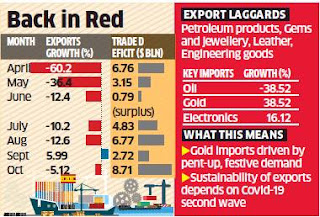 India’s trade deficit in October widened to the most in this financial year as exports declined 5.12% on-year to $24.89 billion after growing in September, led by a drop in outbound shipments of petroleum products, gems and jewellery, leather and engineering goods.

The contraction in exports was lower than the preliminary estimate of a 5.4% decline as shown by the commerce and industry ministry earlier this month.

After contracting for six straight months, India’s exports had grown in September. In October, 20 of the major 30 export sectors grew.