Samvat 2077 starts with sensex at a new life high 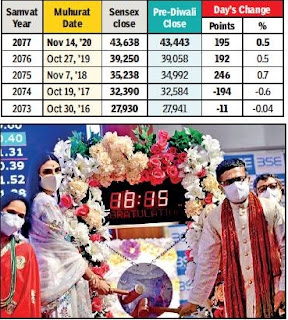 Samvat year 2077 started on a strong note with the sensex scaling a new life-high at near 43,850 mark and closed with a 195-point gain at 43,638 points, also a new closing high. Continuing with the recent euphoric trend, the special hour long trading session on Saturday evening started on a high with the sensex at 43,815 points, up 372 points with HDFC Bank, Infosys and Reliance Industries leading.

Samvat, also called Vikram Samvat, is the year according to one of the Hindu calendars that is followed mainly by the Gujarati trading community who dominate Dalal Street. Every year BSE conducts a special trading session on the first day of the Samvat year, which also happens to be the Diwali day. This trading period is called the Muhurat session. Before the start of the hourlong Muhurat session, every year BSE has a Lakshmi Puja at the exchange’s Convention Hall, usually attended by most brokers, their families, friends and other people. This year, however, due to the ensuing Covid-19 pandemic, attendance at the exchange was restricted.

Dalal Street veterans say that on this day, those who follow the Samvat year should always buy some shares, even if in small lots and should never sell any. With a large number of individual traders and traditional brokers resorting to only buying stocks while most of the institutions are closed for Diwali, the sensex usually shows an uptick during the Muhurat trading session. Historically, on most of the Muhurat sessions the sensex had closed higher. In the last five years, the sensex closed higher on three occasions but had closed deep in the red during Samvat year 2074 and only marginally lower during Samvat 2073.

Brokers remain optimistic about the market for the next one year, despite the unprecedented damage done to the economy by the pandemic. The main reason for such optimism is the steps taken by the government in the last seven-eight months.

Market players also feel that with India Inc taking every step to revive their businesses with cost-cutting being one of the main strategies, investors have responded well. These measures have taken the stock market to a new high while the economy is still languishing. They also feel that the government’s recent policy initiatives would now help the revival in the economy in the medium to long term.