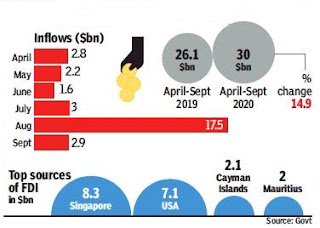 Foreign direct inflows went up by almost 15% during the first half of the current financial year. Mauritius slipped to the fourth spot as the preferred source to route funds into India, with the US and tax haven Cayman Islands overtaking it.

While company-wise break-up was unavailable, investments into Mukesh Ambani’s two outfits— Reliance Jio and Reliance Retail—by a host of investors are seen to be the main reason for the spurt in the inflows.

Among the states, it was Gujarat, which cornered over half the FDI with inflows pegged at $16 billion with traditional leader Maharashtra slipping to the third place behind Karnataka. In fact, bulk of the flows came during the September quarter resulting in some celebrations in the government, especially as it comes a day after latest numbers showed that the economy shrank by 7.5% during the second quarter of the fiscal year. 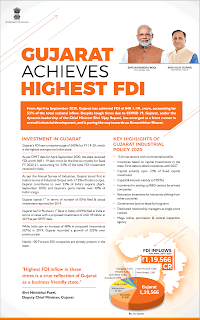