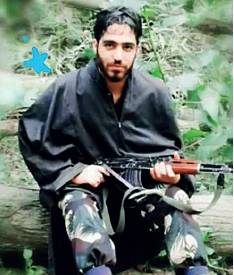 The security forces on Sunday killed Hizbul Mujahideen’s chief commander in Kashmir, Saifullah Mir alias Ghazi Haider, in an encounter on the outskirts of Srinagar.

Saifullah was also the last surviving militant from the Burhan Wani group. The 31-year-old was appointed as the new chief after Riyaz Naikoo was killed in May this year.

He was listed as A++ category terrorist by the security forces and was the most-wanted militant in J&K. He was involved in several attacks on the security forces. Inspector General of Police Kashmir range Vijay Kumar said that Saifullah was gunned down in Rangreth area of Srinagar district.

A suspect arrested from the site is being questioned, he said. Kumar said the police had received information that Saifullah had come to Srinagar district from south Kashmir and was hiding in a house.

Kashmir police chief said that on the basis of a specific lead, joint teams of police and CRPF laid a cordon at Rangreth area and later army also joined in the operation.

Later addressing a press conference, Director General of Police Dilbag Singh said Mir, a resident of Malangpora village in Pulwama district, was active since October 2014 and was associated with slain HM commander Burhan Wani for a long time.

He said Mir was one of the dreaded militants even before taking the command of the outfit.

Mir had killed many innocent people including three policemen, Singh said. He was behind the killing of two truck drivers immediately after the abrogation of Article 370. He attacked a Sarpanch in Kulgam recently but he survived the attack.

“He also had a hand in the killing of three BJP workers in Kulgam earlier this week. He is involved in over a dozen terror cases and has killed over half-a-dozen people. He was also involved in harming several people and destroying government property, as well as involved in several grenade attacks,” the DGP said.

The police chief said the security agencies were tracking the HM commander's movement from south Kashmir towards Srinagar for the last two days. Singh said the security forces have killed over 200 militants this year so far. “This includes about 190 militants in the valley and the rest in the Jammu region,” he said.