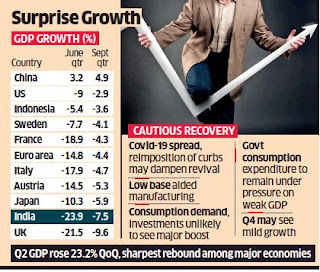 India’s economy recovered faster than expected in the September quarter as a pick-up in manufacturing helped GDP clock a lower contraction of 7.5 per cent as compared to the record 23.9 per cent in the first quarter of the 2020-21 fiscal (April 2020 to March 2021). However, the second consecutive downward graph has pushed India into its first technical recession since the government began releasing quarterly estimates in 1996.

An economy is said to be in recession after it contracts for two consecutive quarters.

As the coronavirus lockdown pummelled economic activity in the first quarter, the gradual opening up from June helped the economy pick up.

Manufacturing clocked a surprise 0.6 per cent growth in July-September after it had shrunk by a massive 39 per cent in the preceding quarter.

Continuing its good showing, the agriculture sector grew by 3.4 per cent, while the trade and services sector showed lower-than-expected contraction at 15.6 per cent.

Public spending was down 12 per cent.

The GDP contraction of 7.5 per cent in July-September compares with a growth of 4.4 per cent in the same quarter last year.

China’s economy grew by 4.9 per cent in July-September this year, faster than the 3.2 per cent growth in April-June 2020.

The improvement in the economy came ahead of next week’s interest rate decision by the RBI and coincides with a drop in India’s daily virus cases, which have tapered off to half of its peak of more than 97,000 infections a day in mid-September.

Most rating agencies had projected that the fall in India's GDP for the second quarter of 2020-21 would be arrested to single digits. 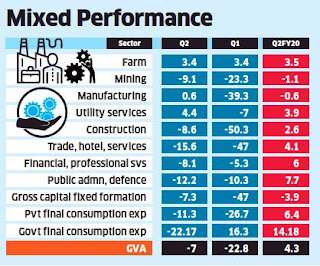