India is only G20 country to meet climate change goal 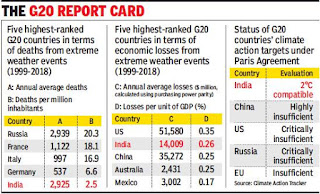 India is the only country among G20 nations which is on track to meet what it had promised in 2015 under the Paris Agreement on climate change unlike the top three emitters — China, the US and the European Union.

India’s track record of being the only “2-degree Celsius compatible” country was flagged in a report, released on Wednesday, by a coalition of 14 global think-tanks, including TERI, which showed that the other 19 leading and emerging economies were far from achieving their goals. Though China has declared that it will be carbon neutral by 2060, it is in the ‘highly insufficient’ category according to the climate action tracker while India is ‘compatible’ with the 2-degree warming goal.

Of course, India is not on track for a 1.5-degree Celsius pathway — a target which gained momentum only in 2018 when the UN’s Intergovernmental Panel on Climate Change  came out with a report showing how the 2-degree Celsius goal (keeping the global average temperature rise within 2 degree Celsius by 2100 from the pre-industrial level) would be devastating for the globe. It was assessed that drought and heavy rainfall risks would be much higher at the 2-degree Celsius mark than at 1.5 degree Celsius.

In fact, no country has 1.5-degree Celsius aligned renewable energy targets. India’s renewable energy targets have, however, become an example. “India is the only G20 country which is on a track consistent to move the world to a 2-degree Celsius warming future, though not a 1.5-degree warming future,” TERI director general Ajay Mathur said. He added that the country was able to “move the needle of its carbon emissions trajectory through the largescale adoption of renewable electricity”. The Climate Transparency Report 2020 of the coalition, released ahead of the G20 summit, showed the G20 countries had lost around 2.20 lakh lives and suffered economic losses of $2.6 trillion due to extreme weather events in 20 years during 1999-2018.