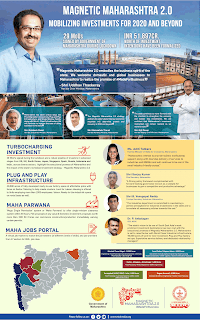 The Maharashtra Industrial Development Corporation signed Memorandums of Understanding worth Rs.34,850 crore with 15 companies from India, Japan, Spain, Singapore and the UK. All firms have pledged to make investments in the state. The MOUs were signed in the presence of Chief Minister Uddhav Thackeray, who attended his first major summit since the lockdown was imposed in March.

Pitched by the state government as Magnetic Maharashtra 2.0, this was the first mega MoU signing conclave of the Shiv Senaled MVA government. MIDC CEO P Anbalagan and Principal Secretary (Industries) Venugopal Reddy were also part of the event. The industries department is led by Shiv Sena minister Subhash Desai.

Officials said that despite the Covid-19 pandemic and the economic downturn, the investor sentiment is running high, and the MIDC has received proposals to the tune of Rs.35,000 crore in the data centres, logistics, oil and gas, auto, electrical and electronic sectors. The MoUs signed on Monday, though, were mostly for setting up data centres. Officials said this will create 23,182 new jobs for the state’s youth.

In the logistics sector, a total investment of Rs.3,000 crore, comprising Rs.1,000 crore from Malpani Warehousing is proposed at Chakan, Talegaon. Further, Japanese major Mitsubishi Electric will invest Rs.500 crore in electrical products and systems at Talegaon, while Bright Sino will invest Rs.200 crore in Raigad.

Officials said that the MIDC will fast-track the land requirement for these projects. “Around 900 acres are required for setting up these projects. Close to 600 acres have already been acquired,” the official said.

Terming the MoUs “very significant”, the CM said trust between the state government and investors is of prime importance. He said, “The last time, MoUs were signed in June, and almost 60 per cent of the work has been done. This is quite satisfying. I am proud of the industry department. I want to bring in more than Rs 1 lakh crore of investments.”

Anbalagan said, “We have had two MoU signing ceremonies during the lockdown. In June, we signed MoUs worth Rs.17,000 crore in the automobiles, petrochemicals, logistics, oil and electronics sectors.” He said the MoUs signed on Monday will lead to direct employment of 25,000 people.