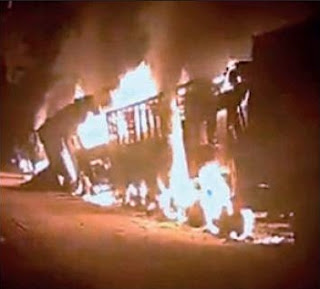 At least five truckers were shot dead and two others were injured when suspected militants of Dimasa National Liberation Army waylaid a convoy of seven trucks, fired indiscriminately at them and later set them on fire in Assam’s Dima Hasao district on Thursday night.

The trucks were carrying industrial raw materials Dalmia Cement and were coming from Umrangsu in Meghalaya.

The company, in a statement, said the incident happened around 8pm in the Ranger Bill area under Diyangmukh police station on the Umrangshu-Lanka road.

“Some of our partner vehicles carrying company materials were targeted by an extremist group. We are saddened to inform you that five drivers who were attacked lost their lives and two were injured. We are committed to ensuring the safety of our employees and extend necessary support to our partners and associates. We are in touch with the government of Assam and they have assured us of taking necessary steps to avoid any such untoward incident in the future,” the company stated.

Police believe it could have been a retaliatory attack by the group after six of its cadres were killed in an encounter in May last in the neighbouring Karbi Anglong district. “We have learnt that five suspected militants first fired from automatic weapons and later set the trucks ablaze. We suspect it to be the handiwork of DNLA,” SP (Dima Hasao) Jayant Singh said. The DNLA announced its formation in April 2019 and established bases active in Dima Hasao and Karbi Anglong districts with the objective of creating a sovereign, independent “Dimasa Nation”. The outfit is headed by Naisodao Dimasa.