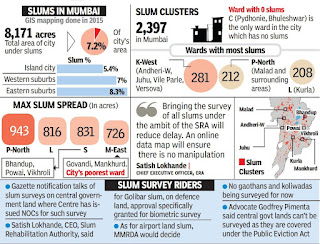 The Slum Rehabilitation Authority has been authorised by the state government to conduct a survey of all slums in Mumbai and Thane. As per a gazette notification issued last Thursday, the SRA will now appoint officers for various zones across the city to carry out the survey and issue eligibility certificates to slum dwellers for free housing.

A slum survey will be carried out afresh in Dharavi too, where the Dharavi Redevelopment Project has failed to take off in 17 years despite it being declared as a vital infrastructure project.

Satish Lokhande, chief executive officer, SRA, said bringing the survey of all slums under the ambit of the SRA will reduce delay. A comprehensive data map that will be available online will ensure there is no manipulation, he said. The SRA has written to electricity distribution companies to provide bills issued to hutment dwellers.

“We carried out GIS mapping of slum clusters in 2015. Now we have appointed four agencies that will go door-to-door, record every hut, every inhabitant of the hut, collect details of Aadhaar and voter ID cards. We shall link all these details for every hutment dweller — the location will be mapped through GIS, photographs of the dwellers, along with their various proofs, will all be put together and this will help us put data in one place, making it easy to issue annexure II,” he said.

Annexure II is an important document that lists the names of slum dwellers who are eligible for free housing. This is normally prepared by the collector’s office or the local BMC ward after a slum redevelopment scheme is announced. There have been allegations of massive corruption and manipulation in the preparation of the list.

Lokhande said that to avoid these conflicts, now on only the SRA will prepare annexure II for all slums and the data will be uploaded on an auto annexure for anyone to download. “Once the data is ready, we shall invite objections/suggestions from the public to correct any anomalies,” he said. The exercise will begin across the island city and suburbs simultaneously next month.

Shweta Tambe, director, Habitat and Livelihood Welfare Association, said GIS mapping was faulty to start with and door-to-door survey in Jogeshwari did not follow protocol. “The data collected is not retrievable and cannot be used. Slum dwellers cannot access the data. And what happens to already announced projects?” she asked.

As per the last survey, the habitable area of Greater Mumbai totals 34,000 acres. The habitable area excludes land under rivers, nullahs, mangroves, forests, parks, grounds and so on, according to a senior SRA official. Urban planners say the area under slums has not spread over the years since slums have seen a vertical growth.