Delhi: Revival of Mughal lake to start by Sept-end 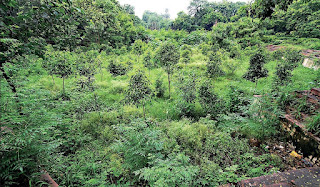 The process of setting up a sewage treatment plant and rejuvenation of a four-acre lake in Roshanara Garden is likely to start by September end. Delhi Jal Board has finalised the tender and is in the process of allocating the project to a concessionaire.

North Delhi Municipal Corporation has agreed to provide 500 square metres space and given the NOC for carrying out the work. The 57-acre park is maintained by the civic body, but due to lack of a water channel it has become dry.

“For constructing the STP and laying pipelines till the lake, all damage done will be repaired by DJB at its own cost. As the lake is a natural waterbody, there is a high likelihood of migratory birds coming there. So, the quality of water after treatment should be such that no harm is caused to the birds and plants. The 6-7 million litres per day capacity of the STP will be sufficient for filling the pond and irrigating the parks within Roshanara Bagh,” the horticulture department of the corporation mentioned in its letter to DJB.

A senior DJB official said they were doing the technical evaluation of the bids and would soon open the financial bids. “We are expecting to initiate the work by September. As far as treatment of waste water is concerned, we have shared the required output quality parameter based on NGT’s guidelines using the best technology (either hybrid or physicochemical). The concessionaire will be responsible for operation and maintenance of the plant for 15 years. The cost will be around Rs.11 crore,” added the official.

Unlike previous projects, the net value of this one would be calculated on the basis of cost of land, technology used, power consumption and O&M value of the plant. “We are considering these factors before finalising the bidder. The same method will be exercised in other upcoming projects for rejuvenating lakes,” said the official.

Earlier, the lake was fed by rainwater and channels from Najafgarh drain. “However, because of the change in slope surfaces in the surrounding areas and increased concretisation, it was lying in a dried-up state for the last one decade, except from 2012-14 when a railway underbridge was constructed nearby and the water pumped out from the site was diverted here,” said a senior corporation official. The rejuvenation of the lake would be done by filling it with treated waste water from drains and sewers.

Situated in Shakti Nagar, Roshanara Bagh is a Mughal-style garden built by the second daughter of Mughal emperor Shah Jahan. The lake inside the lush garden was once a hotspot visited by migratory birds during winters.