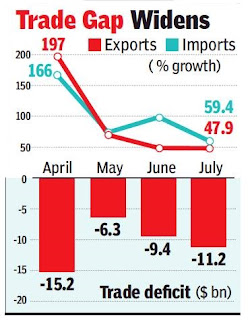 India’s monthly exports hit a high of $35.2 billion in July as higher oil prices and improved demand for gems and jewellery and textiles helped boost shipments from the country.

But the trade deficit widened to $11.2 billion in July, the highest since April, as imports shot up to $46.4 billion, which is the third highest monthly value. Imports surged on account of higher gold and crude oil shipments into the country.

Preliminary data released by the commerce department showed that exports in July were a shade higher than the $34.5 billion in March. Before that, the highest monthly exports were registered in March 2019. Nonoil exports were, however, lower than their value in March 2021, although engineering goods, drugs and pharmaceuticals were among the top performing sectors in terms of growth rate.

Overall exports were 48% higher than July 2020, and 34% more than July 2019. “It is also a sign that global trade is recovering fast… the global demand during this period has also remained buoyant as the order booking positions of the exporters have still been impressive,” said A Sakthivel, president of industry lobby group FIEO.

Economists are worried over the large value of gold coming into the country. “With the phased reopening of the economy, gold imports surged in July 2021. Gold imports have already crossed $12 billion in the first four months of this fiscal, and appear set to surpass last year’s level of $34.6 billion, with a pick-up likely in the festive period,” ICRA chief economist Aditi Nayar said.