New expressway in Andhra from Vijaywada-Bengaluru likely to spur growth 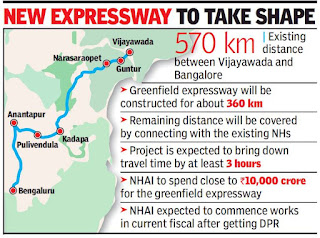 Andhra Pradesh has bagged a big-ticket infrastructure project as the Centre has given the green signal for development of a greenfield expressway between Bengaluru-Vijayawada via Pulivendula, home town of chief minister YS Jagan Mohan Reddy.

The Centre, which initially wanted to launch the works under Bharatmala Phase-II in 2023, has also agreed to start the work during the current fiscal.

The prestigious road infrastructure project has been cleared following a special request made by the chief minister.

The proposed green field expressway is expected to reduce travel time by over three hours as about 65 per cent of the route will get four-lane new highway.

National Highways Authority of India is readying a Detailed Project Report. Sources said that the state government has cleared the route-map after studying alternative routes to improve connectivity between the two cities.

According to the plans approved by the state government, a four-lane express way would be constructed for about 360km of the total distance of 570km. Remaining 110km will be covered by connecting the new expressway with the existing National Highways. This move will not only reduce the travel time but also save huge costs on the exchequer.