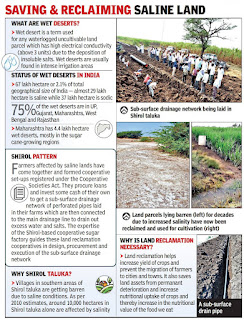 In the 1990s, Mahadev Magdum’s family had to stop farming on their own land in Shedshal village in Shirol taluka as the fields had turned saline and barren due to intensive irrigation. The adults in the family had to find jobs in other farms and the youngsters had to give up education to take up daily wage work. Today, 44-year-old Mahadev expects around 100 tonne of sugar cane produce from his own two-acre farm following a community land reclamation effort he took part in three years ago.

“I had seen my parents working on the farm and growing crops when I was a teenager. Then the land turned barren due to increased salinity. We had to go through many hardships and give up our studies. Now, after almost three decades, my farm is totally reclaimed and I can dream of educating my children,” said Mahadev.

Mahadev is just one of several hundred farmers in Shirol taluka of Kolhapur district to benefit from saline land reclamation projects undertaken by the farmers themselves by setting up cooperatives. Some of the farms here in the taluka had been barren for up to 50 years, but gradually they are being reclaimed and made fit for cultivation.

The farmers are guided by Ganpatrao Patil, the chairman of the Shree Datta cooperative sugar factory. He got the farmers to take loans from cooperative credit societies at lower rates. The money was used to lay sub-surface drainage pipes in the “wet deserts” — a term used to describe land that has become barren due to intensive irrigation. On such land, the water stagnates and does not percolate. As a result, insoluble salts get deposited on the land, turring it barren over time.

D S Bundela, the head of the division of irrigation and drainage engineering at the Indian Council of Agriculture Research’s Central Soil Salinity Research Institute at Karnal in Haryana,said: “Sub-surface drainage projects implemented by the Shirol farmers, who have formed cooperatives, is the only such successful example we have in India. The farmers just need some monetary help from the government. It takes about Rs 2-2.25 lakh to implement the project in each hectare.”

Bundela added: “The government’s own projects have limitations. Often, there is low or no farmer participation. As a result, such projects do not attain the desired results. However, in the cooperative set-up, the farmers can monitor the execution and maintenance of the projects as their share of money is also involved.”

In India, more than 67 lakh hectare of land has turned barren mostly due to intensive irrigation. India is a signatory to the Bonn Challenge 2015, an international effort to reclaim the degraded land. India has pledged to reclaim 21 lakh hectare of degraded land. Though the target is ambitious, it can be met by implementing the models adopted by the Shirol farmers, said Bundela.

She has decided to try out the model on a pilot basis in Karnataka and other places in Maharashtra.

“We changed the minds of people who were reluctant to return to the farming. Earlier, the banks did not give loans as the land was branded “uncultivable”. We provided loans to the farmers to adopt the technology. To increase participation in the project, we set up land reclamation cooperative societies for one to two villages. Now, three years down the line, more than 4,000 hectare of farmland has been reclaimed. The farmers have started returning the loans and living with dignity. Most importantly, they have reclaimed their lifelong assets — their farmlands,” said Patil.

Several renowned agricultural activists, experts, officials, and politicians have paid visits to the cooperative land reclamation projects in Shirol taluka. The experts say that the land can get restored to its original state within three to four years.