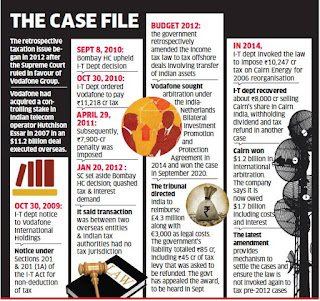 The government moved to bury the ghost of retrospective taxation by seeking to amend the law, a move that is expected to end vexatious litigation with 17 companies, including Vodafone and Cairn, apart from addressing criticism about uncertainty of policy regime in the country.

The amendments, moved by finance minister Nirmala Sitharaman, seek to empower the government to withdraw its demand in the cases pertaining to transactions that took place before May 28, 2012 (when the President cleared the Finance Act allowing for retrospective taxation), and to refund money that has been collected in some instances. It, however, comes with the rider that the companies will have to withdraw all cases and not demand interest on the money being refunded.

In 2012, Pranab Mukherjee, the then finance minister, had amended the law retrospectively to levy capital gains tax on transactions related to companies with underlying assets in India, although the buyer and seller may not have a direct presence in the country. The amendment came after the UPA government lost a case in the Supreme Court arising from Vodafone’s acquisition of a 67% interest in an Indian telecom company from Hong Kong’s Hutchison Whampoa. In this case, Vodafone’s Dutch affiliate bought the stake from a company registered in the Cayman Islands, which directly and indirectly held a stake in Hutch Essar in India.

The amendment had resulted in companies seeking international arbitration.

Last year, the government received two adverse rulings in cases involving Vodafone and Cairn Plc. The Modi government, which took over from the UPA, had said that it was opposed to retrospective amendments in principle but had so far not dropped the litigation initiated by its predecessor. Thursday’s development, however, marked a clean break from UPA’s stand.

Government sources said the move was meant to send a positive message to the investor community and marked another “landmark decision reversing an earlier policy” just like the nullification of the Article 370 two years to the date.

The development was sudden as the finance minister caught the business and policy circles by surprise when she moved the bill in the Lok Sabha after it was listed in the supplementary list of business.

While no amount is likely to be paid to Vodafone, Cairn will be eligible for a refund to the extent of the shares sold by the tax department to recover the tax claims. The two companies did not comment on the amendments, but tax experts welcomed the legislation.

Although interest considerations may weigh on some of the companies, which had paid a part of the tax demand, analysts expect that to be a minor irritant.