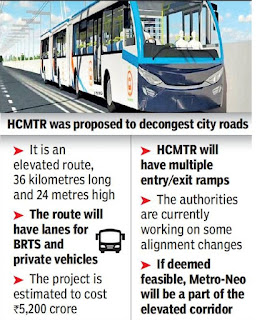 The HCMTR is planned as a 36km-long elevated route with dedicated lanes for Bus Rapid Transit System and private vehicles in the city. Metro-Neo will be a part of the HCMTR; the feasibility report will give the authorities a better idea of how to implement it.

The HCMTR project, first mentioned in the 1987 development plan, remains on paper. It is currently stuck in the approval and administrative stages. Recently, some changes were proposed in the alignment of the route. The project will also require an environmental impact assessment report.

MahaMetro’s managing director Brijesh Dixit said, “We had discussions with mayor Mohol and PMC authorities about the DPR for Metro-Neo. We have also received a letter from the mayor. Metro-Neo is a cost-effective solution, which is also being implemented in Nashik. The feasibility study is expected to take one year.”

Congress leader Aba Bagul, who has been following the HCMTR project for many years, said it was needed to strengthen the city’s public transport infrastructure. “The city needs HCMTR. It has dragging for many years. We recently gave it a push. Now, the Metro-Neo proposal is being studied,” Bagul said.

During a recent visit, Fadnavis said the Union government would provide funds for the Metro-Neo project, as it can be classified as a fresh proposal separate from the ongoing Pune Metro rail work. Civic standing committee chairman Hemant Rasane said they will identify a suitable option.

Activists are concerned the project will have ramifications for the environment. Some said HCMTR will encourage the use of private vehicles and eventually defeat the purpose of strengthening public transport. The Pimpri Chinchwad civic body too has proposed Metro-Neo in its jurisdiction. MahaMetro’s study will also focus on how the two can be seamlessly integrated.