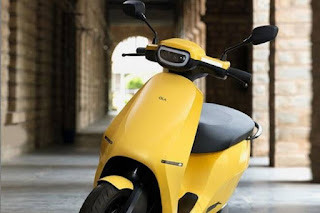 Ola Electric has marked its entry into the high-profile electric vehicle market with two models of scooters that the company said will be priced below that of rivals but offer higher range and better performance when it becomes available to consumers in October.

The company, which will compete with the likes of EV scooter maker Ather Energy as well as Bajaj Auto and TVS Motors, aims to boost production capacity at its manufacturing plant in the state of Tamil Nadu to one million scooters very soon. The company claims to have received over one lakh pre-bookings in the first 24 hours of it being made open to the public.

Bhavish Aggarwal, founder and CEO at ANI Technologies, the parent company of both ride hailing firm Ola and EV maker Ola Electric, said the company is seeing “demand for this vehicle from everywhere, and obviously from the bigger cities as well, as scooters are an urban mobility product.” “The S1 and S1 Pro are industry leading products with best-in-class range, speed and cost,” he added.

With a starting price of ₹99,999 — including subsidies under the second phase of the Faster Adoption and Manufacturing of Hybrid and Electric Vehicle scheme but omits state-level subsidies — the scooter will also be available in a pro version priced at ₹1,29,999. It will be open for purchase from September across1,000 cities and towns. Ola has said its scooters will also be more affordable than even its petrol powered rivals in some places after accounting for state subsidies for EVs.

Ola’s top offering — S1 Pro — will have a 3.97 kilowatt-hour battery pack that is rated to last for a range of 181 kilometres with a top speed of 115 kilometres per hour.

Aggarwal said buyers can expect 85% of that range in real-world conditions, while claiming that this was still twice as much as what competitors in the market were offering today.

The lower-priced S1 gets a smaller 2.98 KwH battery pack, which is still larger than that offered in the Ather 450X, Bajaj Chetak or TVS iQube scooters. It provides a range of 121 kilometres, while its top speed will be restricted to 90 km/h.

Both models are powered by a 8.5 kilowatts peak power that can propel the scooters from 0-40 km/h in about 3.6 seconds.

Ola will also roll out an at-home service network in every city where it sells its EVs. It claims riders can expect a 40% lower total cost of ownership for its EVs over a period of five years, when compared to the cost of owning a petrol-powered scooter, with an average daily travel of 20 kilometres.

Ola has also been aggressive in its stance that there should be no reduction in import duties for EVs — a demand being made by global EV giant Tesla and Korean auto major Hyundai — as it will hurt the development of India’s own EV manufacturing plans.

Aggarwal said that India should plan to switch to 100% electric two wheelers by 2025. “The market is ready, the consumer is ready, it’s just that the companies are not ready” when it comes to offering EVs, he added.