Plan to turn Delhi into a global city by 2047 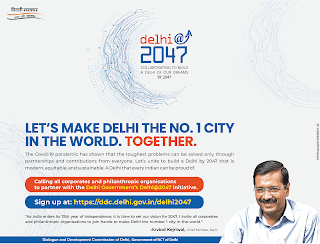 The “Delhi@2047” initiative, which aims to facilitate partnerships with the private sector, CSR initiatives and philanthropic organisations to make the capital a global city by 2047, was launched by chief minister Arvind Kejriwal on Tuesday.

Through this initiative, ideas would be sought from various organisations working in different fields and expertise to transform Delhi into a city where even the poorest of the poor would live with utmost respect and comfort and governance would be transformed and made solution-oriented.

Jasmine Shah, vice-chairperson, Dialogue and Development Commission attended the event along with representatives of some major corporate houses. Delhi@2047 initiative would be hosted by DDC, which is the policy thinktank of Delhi government.

In the budget for 2021-22, Kejriwal had unveiled a bold vision for Delhi by 2047. It envisaged elevating per capita income to the level of Singapore, making the capital ready to bid for hosting the 2048 Olympic games, make Delhi sustainable in providing clean air and water to all residents and resilient in fighting disasters. Delhi would also transition to electric vehicles.

“We have to develop Delhi as a global city. There are a lot of things we need to fix. We have to prepare a roadmap of how the city will be in 2047, when the country will complete 100 years of Independence. While some problems can be fixed in a year or two, some long-term solutions are needed till 2047. But if I say that we will supply water for 24 hours, this cannot wait till 2047 and must happen in the coming few years,” said Kejriwal.

The CM added, “The AAP government has transformed education and the health sector and fixed the power supply chain. We have saved money in each project and made the government financially sustainable and accountable.” He reiterated that the AAP government would make Delhi’s roads on a par with European standards, fix the transport sector and run it on electricity.

“We are clearing encroachments and reviving lakes. There are large-scale projects for making parks and gardens for which we are involving local communities and RWAs. We have to work on solid waste management. If an international tender is issued, hoards of companies would be ready to clean Delhi. In this day and age, even garbage sells. We need to get rid of air and water pollution. We need to clean the Yamuna. But we cannot do it alone. We need help from the citizens as well as the corporations,” Kejriwal said.

The Delhi@2047 initiative is starting off with three focus projects, including “Khelo Dilli” that aims to build world-class playgrounds in government schools, “City of Lakes” where more than1,000 waterbodies would be rejuvenated and bridging the digital divide in schools.