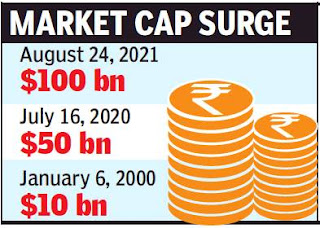 Infosys has joined the elite club of Indian companies with $100 billion or more in market capitalisation. The only others are Reliance Industries, TCS and HDFC Bank, with m-caps of $186 billion, $180 billion and $116 billion, respectively.

The milestone was achieved in morning trade on Tuesday when Infosys shares touched a year high of Rs 1,755 on the BSE. This took the mcap to $100.7 billion. The stock closed at Rs 1,720, down 1%. On the New York Stock Exchange too, Infosys’s m-cap was close to $100 billion in morning trade.

While Infosys took 20 years to reach $50 billion in m-cap, the next $50 billion took just over a year, an astonishing growth rate under its CEO Salil Parekh. IT companies are seeing a smart recovery from the pandemic, thanks to their clients’ desire for digital transformation through cloud and increased focus on data and analytics.

Former Infosys CFO Mohandas Pai said, “In 1994, Infosys had a valuation of $100 million. In 27 years, it has crossed $100 billion, and it’s a great story. Infosys’s rise reflects the rise of India after liberalisation and the rise of the global IT services industry. It should have come earlier, except for the disruption caused in the firm.”

Marti G Subrahmanyam, who is the Charles E Merrill professor of finance, economics and international business in the Stern School of Business at New York University, and who was on the board of Infosys from 1998 to 2001, recollects that when he joined the company, it had revenue of $47 million and 1,500 employees. “They raised the bar for corporate-governance ethics in India. The board wasn’t merely an adornment to be seen. My views were respected and I had several heated debates with the management. The secret sauce is good governance, values and ethics, hard work and NRN’s vision,” he said.

It has been a fabled journey for the Bengaluru company that was started by NR Narayana Murthy along with six others in 1981. It was listed on the Indian stock market in 1993 and became the first Indian registered company to list on a US stock exchange, Nasdaq, in 1999. Infosys has long been considered the gold standard for corporate governance among Indian corporates. “When in doubt, always disclose,” was Murthy’s mantra. In a webinar last year, Murthy said, “The good thing about Infosys founders is that they were high in aspiration, they were confident, they were hardworking and had good values, but we had very little money. For the first 13 years or so, none of us had a car, all of us lived in rented houses… Therefore, there was a little bit of dissatisfaction among some of the spouses.”

Vallabh Bhanshali, cofounder and chairman of Enam Group and who helped launch Infosys’s IPO, said, “To me, Infosys’s value lies not so much in its market cap as much as in what it has done to arouse aspirations among Bhartiya to create enterprises that will earn the admiration of all. How that can happen only with better governance has contributed hugely to the gradual transformation of the corporate world. $100 billion is only an intermediate milestone for a company that is still young and hungry,” he said. When Enam concluded the Infosys IPO, the issue had been “barely subscribed”.