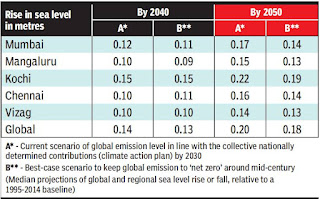 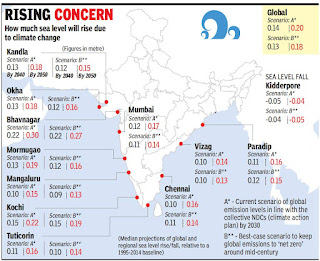 Indian coastal areas will face a sea level rise of 0.1 metre to 0.3 metre in the next two to three decades due to global warming, with Bhavnagar in Gujarat facing a rise of 0.22 metres that may submerge vast low-lying areas, a projection by Nasa has said.

The sea-level rise and its impact will be experienced in varying degrees in other coastal cities and ports such as Kochi, Mormugao, Mumbai, Mangaluru, Chennai, Vizag and Paradip during the period, shows an online visualisation tool of the US space agency using projections from the latest report of the UN’s Intergovernmental Panel on Climate Change.

It features 12 Indian cities, with Bhavnagar hit by 2040 followed by Kochi (0.15 m), Mormugao, Kandla and Okha (0.13m at each location) and Mumbai (0.12m) among coastal cities and towns in the present global greenhouse gas emission cut scenario from the current (1995-2014 baseline) level.

Bhavnagar, in fact, shows a higher rise than the global average, which points at a sea-level rise of 0.14 metre by 2040 and 0.2 metre by 2050 from the current level in the present emission cut scenario.

Interestingly, the tool shows a decline (0.05m) in sea level at Kidderpore (near Kolkata) by 2040 and this minor fall can be attributed to a shift in ocean water circulation and other climatological factors due to warming.

Even in the best-case scenario (net-zero emission by mid-2050), the extent and order of sea-level change remains more or less the same in these cities with a minor change in the level of rise by 2050 compared to 2040. The rise is higher in the long-term (by 2100) but it can be balanced if the world takes deep emission cuts beyond mid-century.

Information through Nasa’s online tool that assessed location-based projections can be used by policymakers in taking critical decisions about economic and public policy to protect local communities from the potentially devastating effects of sea-level rise in coastal areas. It will help in taking different adaptation measures, including setting up disaster-resilient infrastructure in coastal cities, taking in view the future sea-level rise scenarios. Nasa’s tool provides data till 2150 using different emission-cut scenarios on the map