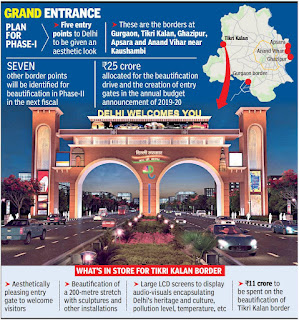 The Delhi government’s plan to beautify entry points of the capital to make them aesthetically pleasing is finally set to take off from the Tikri Kalan border.

The government had announced in early 2019 a project for beautification of all the entry points of the city. However, the proposal for the project prepared by Delhi Tourism and Transportation Development Corporation didn’t get the nod at that time from Delhi Urban Art Commission, which wanted some modifications.

“DUAC has now given the green signal for the Tikri Kalan Delhi-Haryana border entry project on NH-9,” a Delhi government official said. Sources said that DTTDC had to make modifications in its proposal quite a few times to finally receive the nod from DUAC, which reportedly didn’t want any permanent construction at the entry point. The Delhi-Haryana border at Tikri Kalan is located on National Highway-9.

“The viaduct of Delhi Metro’s Green Line (Inderlok-Brigadier Hoshiyar Singh) is located right in the middle of the national highway and is also proposed to be beautified along with the entry point stretch,” the official said. “After Tikri Kalan border, Delhi Tourism plans to take up entry gate beautification projects at the Apsara border and Kapashera border next, following approvals.”

According to sources, the project will see not only an aesthetically pleasing entry gate to welcome those visiting the capital but also beautification of a 200-metre stretch with sculptures and other installations. “Large LCD screens will display audio-visuals encapsulating Delhi’s heritage and culture, apart from pollution level, temperature, etc.,” they said.

In the annual budget announcement of 2019-20, deputy chief minister Manish Sisodia had allocated Rs 25 crore for the beautification drive and the creation of entry gates. Sources said Rs 11 crore would be spent on the beautification of the entry point at Tikri Kalan border.

“Entry points to Delhi will be given an aesthetic look. In Phase-I, five entry points will be beautified, including the borders at Gurgaon, Tikri Kalan, Ghazipur, Apsara and Anand Vihar near Kaushambi,” Sisodia had said, adding that seven others will be identified for beautification in Phase-II in the next fiscal.

Historical monuments like India Gate, Rashtrapati Bhavan and events such as Dandi March will be showcased through sculptures along the stretch at the border points.