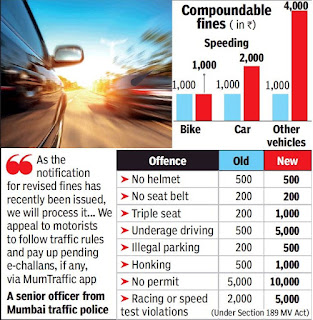 The Maharashtra state government issued a notification under the Motor Vehicle (Amendment) Act, which stipulated revised compounding fines for traffic offences. Most of the hiked fines are related to “road safety” and with the objective to bring down fatalities and ensure better road discipline, officials said.

However, the fines for not wearing a helmet or seatbelt, which pertain to “personal safety”, remain unchanged at Rs 500 and Rs 200. In the case of helmets though, the notification says that the rider could be disqualified from holding a licence for 3 months.

For other vehicles, the compounding fees for speeding have been hiked to Rs 4,000. For dangerous driving, the fine is Rs1,000 for two wheelers and Rs 2,000 for cars. And, for second-time offenders, it is as high as Rs 10,000 if the offence is committed within three years or earlier in office, the notification said.

For underage (minor) drivers without licence, the fine will be Rs 5,000 for the owner of the vehicle or any person in charge of it, the notification said. This has been increased from Rs 500, sources said. For triple seats on a two-wheeler , the fines are hiked from Rs 200 to Rs 1,000 and riders will be disqualified from holding a licence for 3 months.

State transport commissioner Avinash Dhakne said parking was a serious issue in Mumbai, and fines for illegal parking have been increased from Rs 200 to Rs 500. The notification also tackles noise and air pollution for which fines have gone up (from Rs 500) to Rs1,000. “We want people to avoid fines and follow traffic rules for road safety,” he said.

A state government official said although fines across most sections have been increased, “for offences like not wearing helmets or seat belts, the fines have not changed”. He said the state government felt the existing fine of Rs 500 for these violations was already high and increasing it to Rs 1,000 as proposed by the Centre would be too “harsh”. Officials said the Shiv Sena which heads the transport department has always been of the view that fines in certain sections were too hefty and so it did not notify the revised fines immediately. “The transport minister had also written to the Centre, seeking a reconsideration of the fine amounts under certain sections. However the Centre did not reduce it,” said the official.

A senior IPS officer from Mumbai traffic police said, “As the notification for revised fines has recently been issued, we will process it and start implementation on the streets shortly. We appeal to motorists to follow traffic rules and pay up pending e-challans, if any, via MumTraffic app.”

The notification does not mention drunk driving as the penalty will be decided by court after prosecution, sources said. The amended MV Act provides for a maximum 6 months in jail and/or Rs 10,000 fine for first offence while it’s maximum 2 years jail and/or Rs.15,000 fine for the second.

For fancy number plates, the fine for offenders who use fancy names like DADA, BABA, MAMA and so on, is Rs 1,000. Also, for no reflectors and tail lamps, important for road safety, the fine is Rs 1,000.

For overloading, the fine is Rs 20,000 for truckers and an additional Rs 2,000 per tonne of excess load. Any driver who refuses to stop and submit his vehicle to weigh will have to pay a huge fine of Rs 40,000. For driving without insurance, the penalty will be Rs 2,000.