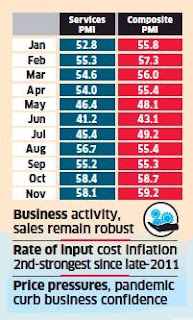 India’s services activity expanded at the second-fastest pace in over a decade in November led by improved new business orders in the festive season, but moderated marginally from October.

In October, the country’s private sector services activity had touched almost a decade-high.

Posting 58.1 in November, fractionally down from 58.4 in October, the India Services Business Activity Index pointed to the second-fastest rise in output since July 2011. The Covid-19 pandemic and travel restrictions caused a further drop in international demand for Indian services.

A reading above 50 on the index indicates expansion while below that shows contraction. Data for the survey was collected from November 12-26.

“The recovery of the Indian service sector was extended to November, with a robust improvement in sales enabling the second-fastest rise in business activity in nearly ten-and-a-half years,” said Pollyanna De Lima, economics associate director at IHS Markit, adding that companies were somewhat convinced that output levels would continue to increase in the year ahead, but worries regarding inflationary pressures weighed on confidence again.

As per the survey report, although business confidence improved to a three- month high in November, the overall level of positive sentiment was well below its long-run average. Some companies expect demand to continue to trend higher, but several others were worried that elevated inflation could dampen the recovery, it said.

Moreover, the overall rate of inflation quickened from October and was the second strongest in almost a decade, behind April.

A sister survey earlier this week showed manufacturing activity in India grew at its fastest pace in 10 months in November.

The Composite PMI Output Index signalled the strongest upturn since January 2012 and rose to 59.2 in November from 58.7 in October.