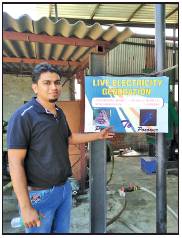 “Poo to Power” may sound awkward and impractical, but Aditya Aggarwal and his brother Amit have achieved it in Karnal. Two industries, one producing wire nails and another tinner rivets, owned by the family run on 100% electricity produced from cattle dung from ‘gaushalas’ or cow sheds.

The dung-based power plant started in 2014 without government support. It generates around 2 MW of power.

Elsewhere, in Silani village of Haryana’s Jhajjar district, Sukhbir Singh stumbled upon the idea of producing power from chicken faeces at his poultry farm to escape the clutches of corrupt electricity department officials in 2010. Today, his bio-gas plants generate enough power to meet most of the electricity needs of four poultry farms.

Change-makers like the Agarwal brothers, Sukhbir Singh and others like them in Punjab, Uttarakhand and Tamil Nadu have come in handy for the Modi government to make its “Gobar-Dhan” scheme distinct from other government projects by encouraging entrepreneurs to convert cow dung and other bio-mass available in rural areas to generate electricity, gas and fertiliser and make it a part of their business model. Their case studies have helped the government avoid reinventing the wheel and make the initiative financially sustainable.

According to government estimates, India has a 30-crore cattle population and about 30 lakh tonnes of cattle dung is produced daily. This can be a major source for bio-gas and manure. The government plans to roll out the scheme across 350 districts in the first phase and cover the rest during the second phase.

In 2018-19, the government targets to set up about 700 bio-gas plants across the country by providing performance-based incentives to gram panchayats, selfhelp groups and bulk generators like gaushalas. Officials say government will provide 25% advance amount as incentive for panchayats and SGHs.

Aditya said they initially set up a fertiliser plant close to their industrial units to manage the huge quantities of cattle dung from local ‘gaushalas’. His father was in the managing committee of these cow sheds.

“We used to spend Rs.5 lakh annually to manage the cattle waste. When we started, our focus was to make fertilizer. Later, we realised we can tap the gas to generate electricity for our own consumption. We use 20,000-30,000 kg of cow dung daily. For us, cow dung is ‘green gold’ like people consider milk as ‘white gold’,” said the computer science graduate.