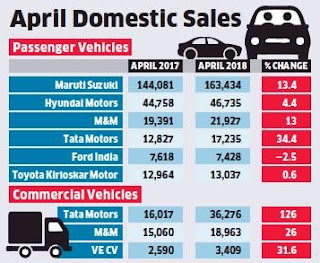 India’s automobile companies started the new financial year on a strong note, with companies posting robust sales in April and predicting continuation of the trend. However, some industry executives said increasing fuel prices could pose challenges to growth.

Maruti Suzuki, which reported a 13.4% increase in sales at 163,434 vehicles in April, continued to drive the market. Though sales of mini cars Alto and WagonR declined 2.8% and those of the utility vehicle portfolio comprising Ertiga, Brezza and S-Cross expanded just 0.8%, the compact section — Swift, Ignis, DZire, Tour S, Baleno and Celerio — posted a strong 31.8% increase in sales.

Maruti Suzuki expects its sales to grow in double digits this fiscal year. It plans to undertake measures to improve productivity at its manufacturing facilities in Haryana to meet demand. Parent Suzuki’s Gujarat facility will chip in with an additional 90,000 units in the year through March 2019.

Korean rival Hyundai Motor posted 4.4% growth in local sales at 46,735 units in April. Director for sales and marketing Rakesh Srivastava attributed the growth to the strong performance of the Grand i10, Elite i20, Verna and Creta. These vehicles comprised 79% of the total sales volume for the company in India. Home-grown Mahindra & Mahindra and Tata Motors registered 13% (selling 21,927 units) and over 34% (17,235 units) expansion, respectively, in the past month.