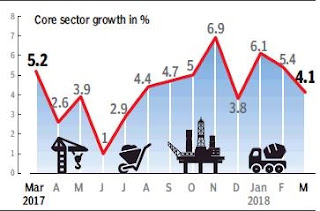 Growth in the sector for 2017-18 was 4.2%, slower than 4.8% posted in the year-earlier period. The eight core sectors account for 40.3% of the index of industrial production and serve as an advance indicator of the performance of industrial output data to be released later in the month. Crude oil output contracted 1.6% during March, while natural gas grew an annual 1.3%. Refinery products rose 1%, while fertiliser sector grew 3.2%. The coal sector rose a robust 9.1%, while the cement sector increased 13% in March. The steel sector grew 4.7% and electricity rose 4.5%.