Industrial growth slows to 4.4% in March 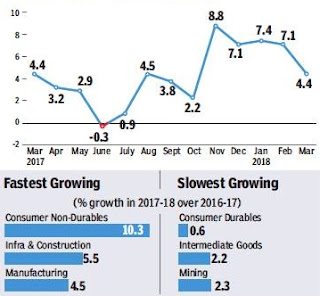 Industrial output growth slowed to a five-month low in March due to sluggish manufacturing, mining and capital goods performance, posing a challenge for policymakers to push growth in the key sectors.

The index of industrial production rose an annual 4.4% in March, slower than previous month’s downwardly revised 7% expansion and similar to 4.4% growth in the same month last year. Industrial growth for 2017-18 stood at 4.3%, lower than 4.6% posted in the previous year. “Core sectors have been consistently losing steam. Growth in the economy’s eight core sectors, which make up about 40% of total industrial production, slowed to 4.1% in March, from 5.3% in February and 6.1% in January. Growth in the non-core sectors too slipped during the month. Separately, trade data reported a slowdown in non-oil exports in March. That said, an unfavourable base effect was also behind the slowdown in IIP growth in March,” ratings agency Crisil said. The RBI is expected to hold interest rates when it reviews monetary policy in June.