Sikkim Airport ready for take off 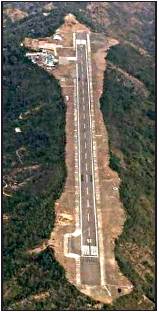 The newly constructed airport at Sikkim has received the nod for take-off. The Directorate General of Civil Aviation has issued an aerodrome licence to the greenfield airport at Pakyong, paving the way for commercial flights to the Himalayan state.

The licence issued is for small aircraft like ATRs and regional jets and not narrow bodied planes like Boeing 737-800 and Airbus A319/320 due to landslide concerns.

The then Union civil aviation minister P Ashok Gajapathi Raju had visited the airport on December 1 and inspected its infrastructure and facilities.

The Sikkim government has been keen to start the airport ahead of the summer tourist rush. Direct flights are expected to give a huge fillip to tourism with travel time set to reduce by over five hours. At present, tourists fly down to Bagdogra and then drive down to Pakyong.

The airport will also come in handy during strife in the Darjeeling Hills when connectivity to Sikkim gets disrupted.

The greenfield airport at Pakyong was approved by the Centre in 2008. The foundation stone was laid a year later. The project was completed in 2017 at an estimated cost of Rs.300 crore.