The luck of the Gowdas 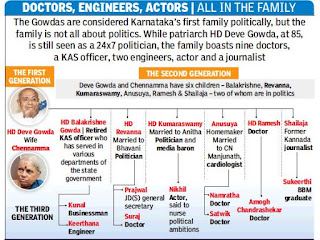 In 1996, Deve Gowda became PM with just 16 MPs from Karnataka. In 2004, with just 58 MLAs, JD(S) formed the government in the state with Congress. The coalition lasted two years. In 2006, JD(S) ditched Congress and aligned with BJP, with HD Kumaraswamy as chief minister.

Now, again, with just 38 seats, Kumaraswamy will take over as CM and call the shots in the government. He has another notable achievement this time – he is the only candidate to have won from both constituencies he contested from – Ramanagara and Chennapatna. Former CM Siddaramaiah and BJP’s Sreeramulu lost from one constituency each.