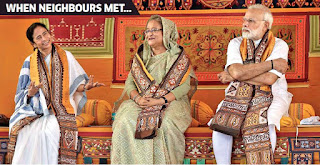 Prime Minister Narendra Modi and Bangladesh Prime Minister Sheikh Hasina spoke of a “golden chapter” being written in Indo-Bangladesh bilateral relationship, seemingly brushing aside the issues that persist between the two nations.

Bangladesh is seeking India’s support in mounting pressure on Myanmar to take back the Rohingyas refugees. The unsolved Teesta water sharing agreement is also a pain point for India’s eastern neighbour.

At the 49th convocation of the Visva-Bharati University in Shantiniketan, Bengal, Hasina mentioned the Rohingya crisis as a “humanitarian” issue and said her government seeks India’s help to build pressure on Myanmar so that they take back their people.

Her Indian counterpart, however, asserted that his government has brought resolution to some complex issues which earlier used to be believed as “impossible to resolve”, and assured her of resolving the remaining issues soon.

“In these years, we have been writing the golden chapter of India-Bangladesh relationship. There are certain issues which earlier used to be believed as impossible to resolve. But we have jointly brought resolution to these issues,” said Modi at the Bangladesh Bhawan, which was inaugurated the same day. “The connectivity issue was almost shut for a long time. But now we are working on these issues and increasing all sorts of connectivity between two countries. We have already started Kolkata-Khulna AC Bandhan express.”

Hasina invoked Indira Gandhi and narrated how she and her sister were taken care of by India after the massacre of her family in Bangladesh. Calling India her “biggest friend”, she said her country has always got support from India when needed.

Modi reciprocated saying, “India will always be there for Bangladesh. The friendly relationship between India and Bangladesh is now a subject of study. I believe that the key to progress for both the countries lies in mutual peace.” Congratulating Bangladesh for its successful launch of its first satellite, Bangabandhu 1, Modi said the countries will have cooperation in using space technology.

Modi and Hasina addressed a gathering at the Bhawan and then had a one-on-one meeting. According to sources, the leaders discussed bilateral issues including security concerns, trade deficit and connectivity.

West Bengal Chief Minister Mamata Banerjee was also present during the programme. She is scheduled to meet Hasina in Kolkata on Saturday.