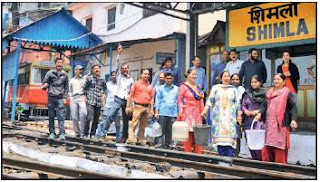 The last place you want to get your drinking water from is the cremation ground. But with the water crisis in Shimla worsening, residents of Chalaunthi area in the suburbs were forced to fetch water from local cremation ground on bypass road on Sunday. They had not got water for the sixth day and many felt that it was better to get it from the dead rather than dying of thirst.

Hundreds of agitated residents even blocked the national highway at Kanlog bypass for around two and half hours from 4 pm on Monday as they wanted the authorities to know about their desperation. In the evening, they blocked the Chandigarh – Shimla highway at the Chakkar checkpost.

“We are extremely upset at having to drink water from a place meant for the dead. But the situation is acute and we have no option,” says Satish Kumar, vice-president of Sanjivani Jan Kalyan Society. He adds that after their protest, a water tanker was sent to their area but that was not sufficient to meet the needs of 5,000-odd residents.

The water crisis has been created because of little snowfall in the region. This has led to many channels that feed water to the city drying up.