KCR plonks himself on front pages 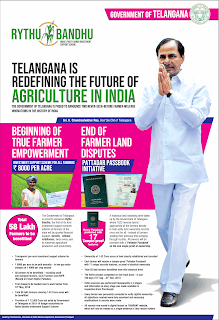 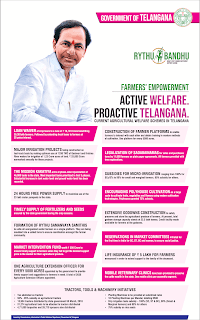 Saffron saw red when it saw pink splashed on front pages of newspapers across the country on Thursday morning, not just in English and Hindi, but many regional languages too. It was TRS president and Telangana chief minister K Chandrashekar Rao’s way of announcing his arrival on the national political scene.

The morning after, there, he was – practically declaring himself as the ‘man of the moment’ and subtly as someone the country had looked up to – for leadership. The advertisements in newspapers, including several regional languages, said it all.

Arguably, it is the first of such a scheme in the country, if not in the world, and KCR wanted the world to know it. The information hit them on their faces when front page advertisements declared the big idea he was implementing for farmers. Touted as the ‘never seen before farmers welfare innovations in the history of India’, the advertisements explained about the ₹8,000 per acre for farmers as investment support scheme and new pattadar pass books after the ‘cleansing of land records’.

Rival political parties have not been able to digest his ‘frontal attack’. The Bharatiya Janata Party’s Telangana state unit described the advertisements in other states as misuse of public money. IT and municipal administration minister K T Rama Rao retweeted BJP Telangana’s twitter comment with a response asking: “BJP folks seem worried that there may be a demand to replicate and implement Rythu Bandhu scheme in their states?” Congress spokesperson Sravan Dasoju too commented about the publicity blitzkrieg and condemned it. “Absurd misuse of hard-earned tax payers money by the Telangana chief minister for self-propaganda and emerge as a national leader,” he commented.

Clearly, KCR announcing himself on the national scene with a unique scheme made him the talking point. Trinamool Congress leader and West Bengal chief minister Mamata Banjeree whom KCR met, has herself been taking initiatives to meet leaders of various parties to form a non-BJP front. Andhra Pradesh chief minister N Chandrababu Naidu, who already reached out to various parties in the context of AP not being granted special status by the Centre, is playing his cards close to his chest on leading a front of his own. But KCR seems to have stolen the thunder –at least for now.