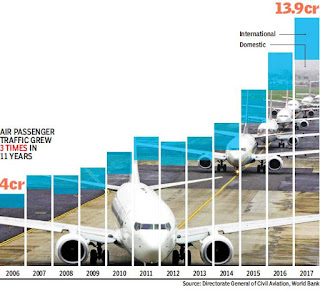 Airports in India — from the busiest like Delhi and Mumbai to smaller ones in Patna and Guwahati — have become synonymous with queues, delays and congestion. On the air side, failure to add runways and parking bays has meant airports are unable to clear airlines’ requests to add more flights.

In December, 45% of flights were delayed at Mumbai.

India has recorded double-digit growth in domestic air passenger traffic for the past 42 months, shows data from International Air Transport Association. Passenger traffic at Delhi airport grew 14% in 2017 compared to the previous year, making it the fastest growing airport in the world, according to Centre for Asia Pacific Aviation.

It’s the same across the country. Hyderabad airport was meant to handle 12 million passengers per annum, but footfalls crossed 18 million in 2017. Last year, Kolkata’s Netaji Subhas Chandra Bose International Airport handled 19.5 million passengers — the terminal can manage 20 million passengers and will run out of space this year. Even at Patna airport, passenger traffic hit 29 lakh last year — a 48% increase over 2016 numbers — when the airport can handle just 7 lakh passengers a year.

Mumbai, India’s second busiest airport, does not feature among the world’s top 20 fastest growing airports. It’s telling because till 2012, Mumbai was the busiest airport in India.

Delhi and Mumbai now deny slots to airlines to add flights as the airports are at capacity. Indian airline companies have ordered 900 aircraft but have nowhere to park.

An aviation ministry official said: “Air traffic has grown faster than the rate at which infrastructure is being added. There is a temporary mismatch. We are working on it. Delhi, Mumbai, Pune, Patna and Goa will get second airports in the next three to five years.”

An Airports Authority of India official said: “AAI will construct 273 aircraft parking bays for A321 aircraft in next five years. State governments have been requested to provide additional land.”

But experts say the facilities should have been operational by now. IATA India recently said: “IATA anticipates India will be the third largest aviation market by 2024. To make this a reality, airport capacity needs to be augmented.”

AAI says the overall terminal capacity is 33.4 crore passengers per annum against a demand of 30 crore. “As per our own forecast, the country would need to construct an additional capacity of 50 crore by 2030,” said a senior official. 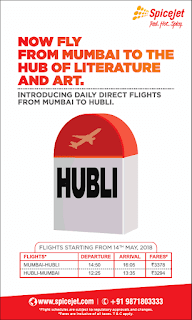