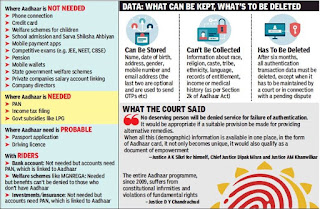 The Supreme Court upheld the validity of the Aadhaar Act, terming it a beneficial legislation, but weeded out provisions which had potential for misuse. Aadhaar will no longer be mandatory for opening bank accounts, buying mobile phone SIM cards, getting school admissions, or for appearing in board or common entrance examinations.

The SC also ruled that Aadhaar would be voluntary for those who do not intend to receive any subsidy, benefit or services under welfare schemes, and should only be given to Indian nationals. However, those filing income tax returns must link their Aadhaar with their PAN (Permanent Account Number).

A five-judge Constitution bench of CJI Dipak Misra and Justices A K Sikri, A M Khanwilkar, D Y Chandrachud and Ashok Bhushan upheld the NDA government’s Aadhaar legislation by a 4-1 majority, but said its insistence on linkage to bank accounts and mobile phones was disproportionate and every citizen could not be suspected of acquiring black money.

“The portion of Section 57 of Aadhaar Act which enables corporate bodies and individuals to seek authentication is held to be unconstitutional,” the majority verdict said, agreeing with the petitioners that such a provision could lead to sharing of protected data and privacy of citizens with private bodies.

The court, while taking note of apprehensions expressed about Aadhaar’s potential misuse, rebuffed their opposition to passage of the Aadhaar Bill as a money bill and said it was perfectly justified.

The opposition could have stalled the bill in the Rajya Sabha. However, the Lok Sabha Speaker upheld categorisation of the Aadhaar legislation as a money bill — which reduced the Upper House’s role to rendering a mere advisory on corrections required in the bill.

Of the 1,448-page judgment, Justice Sikri wrote the majority judgment for himself, CJI Misra and Justice Khanwilkar, running into 567 pages. Justice Bhushan penned a separate but almost concurrent 400-page opinion.

Delivering a powerful 481-page dissent judgment, Justice Chandrachud said categorisation of an ordinary Aadhaar bill as money bill was wrong and its passage without voting in Rajya Sabha rendered it unconstitutional. Justice Chandrachud also raised serious issues about Aadhaar having the potential to turn India into a surveillance state.

The scathing observations, however, paled before the pat the NDA government got, with the majority judgment endorsing the idea of Aadhaar as advantageous to the underprivileged millions. “We have come to the conclusion that Aadhaar Act is a beneficial legislation which is aimed at empowering millions of people in the country,” the court said. However, it added, “We are of the view that there is a need for a proper legislative mechanism for data protection.”

It also turned down the contention of the petitioners, 31 in all, that Aadhaar was a means to convert India into a surveillance state. “The architecture of Aadhaar as well as the provisions of the Aadhaar Act do not tend to create a surveillance state. This is ensured by the manner in which the Aadhaar project operates,” Justice Sikri said and detailed Aadhaar’s embedded security and safety measures narrated by UIDAI CEO Ajay Bhushan Pandey.

It also did not find evidence to suggest, as argued by petitioners, that Aadhaar was meant to create 360 degree profiles of individuals. “We are of the view that it is very difficult to create profile of a person simply on the basis of biometric and demographic information. Insofar as authentication is concerned, the Centre and the UIDAI rightly pointed out that there are sufficient safeguard mechanisms,” the SC said.

The SC also struck down Section 33(1) of Aadhaar which permitted a joint secretary level officer to permit release of biometric and demographic data of a person from UIDAI for the purpose of national security. The court said non-involvement of a judicial officer, preferably a high court judge, in adjudicating the need for such data release to investigating agencies and the absence of chance to the aggrieved person to challenge such a decision made the provision bad in law.

Striking down parts of Section 57 of the Aadhaar law, the court said, “We have impressed upon the government to bring out a robust data protection regime in the form of an enactment (legislation) on the basis of Justice B N Srikrishna Committee report with necessary modifications thereto as may be deemed appropriate.”

On whether Aadhaar violated privacy, the majority took a broader view of what constituted privacy and extended it to cover dignity. It said Aadhaar, backed by a law, was to ensure human dignity through socio-economic uplift of marginalised sections by ensuring that subsidies, benefits and services reached the intended beneficiaries through proper identification. “Their entitlement to such socio-economic benefits is also a fundamental right,” the court said.

However, it clarified that non-possession of Aadhaar could not be a ground to deny benefits to the needy under a social welfare scheme provided s/he furnished other identification documents.