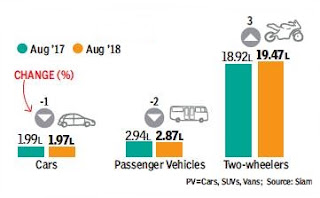 Car sales witnessed a marginal dip in August, the second month in a row, as a higher base and sluggish demand due to heavy rains in many states hit volumes.

Wholesale deliveries to dealerships in August stood at 1.97 lakh units, a decline of 1% over the 1.99 lakh units sold in the same month last year.

However, numbers in five months of this fiscal (ended August 2018) remain robust. Car sales in this period are up 10% and there is a similar growth for overall passenger vehicles category.

New models are also expected to give a boost to the industry, ahead of the festive season that starts in a month or so. While Mahindra and Mahindra has launched a new MPV Marazzo, Hyundai will be launching a new avatar of Santro.

While Mercedes-Benz will drive in a new C Class, Tata Motors and Maruti are set to roll out Harrier SUV and new Ertiga respectively.

Companies are expecting to finish this fiscal with a growth of around 10% for both cars and the larger passenger vehicles category.